Corona virus in Sweden: warnings instead of bans 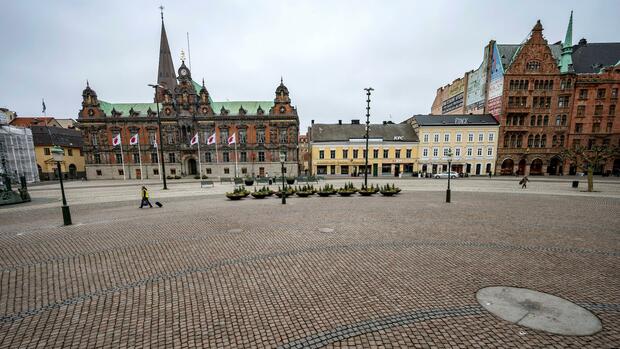 Stockholm It couldn’t be more different: dealing with the corona crisis. The northern European countries, which have been proud of their “Nordic Union” with freedom of travel and cross-border trade without obstacles for decades, have chosen completely different paths in the corona crisis: Closed borders in Denmark, Norway and Finland, far-reaching restrictions with exit restrictions, contact bans and school closings in the three countries.

Only Sweden resists restrictive measures. On Friday, Social Democratic head of government Stefan Löfvén warned his compatriots to do without “unnecessary trips” and to work from home if possible. But he did not want to issue bans.

On Wednesday evening Björn Eriksson, head of the Stockholm health district, shocked at an extra press conference called with alarming numbers: “The situation is now pretty dramatic,” he said. “We now have 1070 confirmed people infected in Stockholm, an increase of 111 people within the past 24 hours”. And the death toll in Stockholm doubled to 37 within 24 hours.

While the Nordic neighboring countries closed kindergartens and schools over a week ago and severely restricted contacts in order to prevent the further spread of the corona virus, Sweden has so far only managed to close upper schools and universities.

Prime Minister Löfvén rather appeals to the reason of his compatriots. He was not afraid of drastic words. “More people will fall ill and more people will have to say goodbye to their relatives.”

Nevertheless, recommendations and appeals remained in Sweden. The Swedish government is struggling to take more drastic measures. Prime Minister Löfvén has repeatedly stressed in the past few days that the economic effects of stricter restrictions must also be kept in mind when making decisions.

Although the government rushed through parliament to rush to close primary schools and daycare centers, the facilities are still open. The burden on society would be too great if parents had to stay at home to take care of the children, said chief epidemiologist of the health authority, Anders Tegnell. Shops and restaurants are still open.

However, the pressure on Prime Minister Löfvén’s government is increasing. More and more Swedes are wondering why the neighboring countries of Finland, Norway and Sweden, as well as most other European countries, have had significantly stronger restrictions on public life, including assembly bans.

There are doubts about the assessment of “Folkhälsomyndigheten”, the national health authority, on whose recommendations all government decisions are based. Johan Carlsson, head of this authority, recently criticized the measures in other countries. “We see the great chaos in many European countries that they caused from one day to the other by closing schools and universities,” he said.

“It does not promote work against the spread of the virus.” Nevertheless, on Friday the government managed to extend the ban on meetings: previously meetings of up to 500 people were allowed, it has now been reduced to 50 people. He responded to a proposal from the national health authority.

The health agency’s recommendations are controversial and have been sharply criticized by some experts in an open letter to the government. “I have the impression that the agency wants to promote the spread of the virus in order to achieve herd immunity. But that’s cynical because the price could be hundreds, if not thousands, of lives, ”said epidemiologist Olle Kämpe.
Even though official Sweden is struggling with bans, many of the appeals seem to have been received. Most restaurants in Stockholm are empty after the government decreed this week that they can only serve at tables or outside the home. The usual traffic jams in the Swedish capital no longer exist. Most people work from home.
The upcoming Easter holidays, however, are a cause for concern, during which many Swedes traditionally go skiing in the Swedish mountains. While all ski facilities in Norway have been closed for two weeks and there are strict assembly bans as in Denmark and Finland, the operators of the ski facilities in the Swedish mountains have so far not wanted to do without the important Easter business.

Only the notorious after ski parties were discontinued. Prime Minister Löfvén and the health authority have warned against trips to the winter sports resorts in the north of the country.
In neighboring countries, people wonder about the Swedish way. Finland, which closed its borders over a week ago, banned all trips to and from the Helsinki region on Wednesday evening.

In Norway, the government also restricted freedom of travel in its own country. And Denmark passed a law on Thursday that would allow the government to ban further contacts. The Swedish government, on the other hand, wants to continue to find the right balance between health risks and negative effects on the economy.

More: The current shutdown calls critics on the scene. It is debated whether the corona measures are still proportionate. The verdict of the Handelsblatt readers is divided.