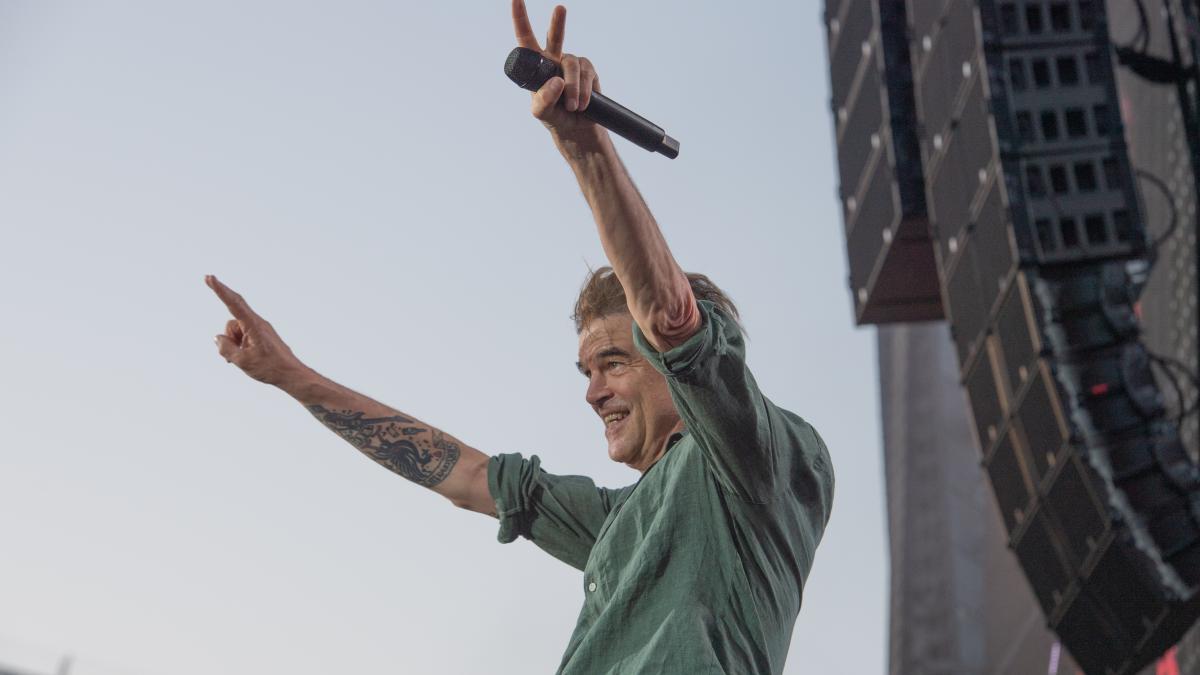 The Toten Hosen’s anniversary concert in the Olympic Stadium: triumphant premiere and sad farewell? A witty walk with Campino through the history of the band.

In the end, there is an ambivalent feeling. Because this Saturday evening in the Munich Olympic Stadium could have been a triumphant premiere and a sad farewell at the same time. Against this threatening double pathos, however, jokes, of all things, help at least with the Toten Hosen, which suggest this two and a quarter hour visit on their anniversary tour.

Because on such UV-intensive days with temperatures of 28 degrees even when the concert ends at 11 p.m., shouldn’t elderly people avoid exertion outdoors, especially uncovered ones? Is Campino now leaving the stage diving, which was once obligatory for him, to a fan, is that why the last button on his shirt, which soon becomes soaked with sweat, remains unopened after opening one button after the other this time?

Happy ending for Campino and FC Bayern with Opel and Sadio Mané?

Or also: Does a complex relationship still have a fateful happy ending between the singer and FC Bayern Munich, which became the German football supremacy in this arena? Although the pants song of abuse at the club in the appropriate stadium bawling voting is initially subject to the naturally more delicate “Ten Little Jägermeister”, it still follows, loudly demanded by the fans. And then in the lines about the “shitty club” someone in the audience stretches up an old FCB jersey with the lettering of the sponsor at the time – and as Campino sang on the band’s debut album: “We are the boys from the Opel gang .” Everything comes together here! And at the very end, before everything sinks into the “You’ll never walk alone” frenzy to the anthem of his heart club, Liverpool FC, he congratulates “Never go to Bayern!” LFC striker Sadio Mané.

And finally there would also be a result in the never-ending game between the Toten Hosen and the doctors, who two days earlier stopped in this same arena after 40 years of band history, it is: around 30,000 to 20,000. In any case, the people of Düsseldorf have more audiences in Munich than the people of Berlin (although both are far below the total capacity of over 70,000). “Away game” won.

But the best and most significant joke of this atmospheric and anecdotal evening is the story of the band itself. When Campino announces a fixed part of the encores on this tour with “Wort zum Sonntag” after almost two hours, he adds that this is actually the last Must be for the song created in 1985. But not because he wants to stop preaching from now on – of course at some point in the program he also talks about the Ukraine war, which shows the preciousness of “our freedom” and at the same time about such concerts for which you have to be ready to fight; and at some point, under the TV tower in the Olympic Park, which is illuminated in Ukraine colors, the classic trousers logo lights up on the stage in rainbow colors to match Christopher Street Day. No, rather because the lyrics of the song say: “I’m not yet 60, and I’m not close either.” And on this Wednesday, just before the next concert, Andreas Frege alias Campino reaches this very threshold. Which of course shows how unimaginable what the band achieved was for them at the time.

Also read about this

Campino with a bit of patriotism and fighting for freedom

But this also leads to further cross-connections. Because the lyrics of the song have at least two nice nuances. Because on the one hand it begins with the line “Everything was better in the past…” And some old punk rock fans may think that when they hear songs like “Love Song”, “Here Comes Alex” or “1000 Good Reasons” that evening in the Comparison to the later stadium anthems – pathos including Kuddel’s eternal “Woohoooo” – but of course “Days like these”, “Alles aus Liebe” and “Get up when you’re lying on the ground” are frenetically celebrated by the crowd. The finer earlier-versus-now arises from the contrast in content. Because back then, the Hosen appeared as a left-wing renegade troupe with outsider and resistance gestures – but today, following the “1000 good reasons” that frowns on any patriotism, Campino says: that today in comparison to the “smothered 80s with all the old Nazis” there’s a lot has gotten better, and that “we can be a little bit proud of our country”, which has now become an anchor of stability in Europe. Not only Germany has changed…

And on the other hand, in “Wort zum Sonntag” follows the reference to 60, which seems infinitely far away: “And only then do I want to tell you what used to be …” In fact, Campino has the Kuddel-Andi-Breiti-Vom-band at the top , which always looks like authentic work and never routine, has brought along plenty of nice stories from the past, appropriate to the venue. He remembers, for example, the holiday trips to Bavaria with his forest- and wildlife-loving father, for whom he then (quite contrary to Borchert) sings the sentimental “Outside the Door”. And Campino also remembers the first performance in Munich in 1983, in a youth center in Erding, where the band was allowed to stay overnight at the time, but at some point found out that they had been locked in there – and therefore in the early hours of the morning knotted sheets from the hold to freedom. In the meantime, the singer calculates, there have been 32 concerts by Toten Hosen. Whether there will be more against?

“Who knows when we’ll see each other again” – that’s what Campino said again and again that evening to an audience that was enthusiastic from the first song to the last rows of the only main stand that was occupied in addition to the arena. At the same time, it’s the first time that the Hosen have played their own concert in this giant oval (they’ve only been there as part of Rock im Park in 1996) – and it’s a triumph. Premiere and farewell at the same time? Actually hard to imagine, when you see Kuddel’s facial expression, overflowing with pure happiness, when the arena rages for the first time that evening, the concert lasts less than fifteen minutes, everyone sings like an incantation: “And again / it’s the same songs / That feel / As if time stood still…” Don’t do it. And of course Campino can change his “Word on Sunday” to 70 from now on. But it’s no coincidence that he recently assured our editors in a conversation that in ten years he wouldn’t see himself wearing his trousers on stage anymore. But honestly, even if life often plays out differently: A conscious farewell, a deliberately last tour, that would be nicer.