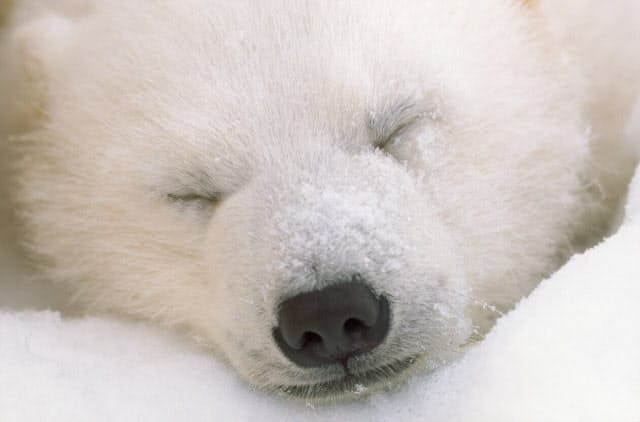 A young polar bear sleeping with snow on its nose. Like humans, most animals need sleep, but each method is unique (PHOTOGRAPH BY NORBERT ROSING, NAT GEO IMAGE COLLECTION).

For humans, sleep is essential, mysterious, and luxurious. The reason why humans need sleep has not yet been clarified, but it is certain. And by increasing or decreasing sleep time by an hour, a person’s day can be both comfortable and painful.

Most animals sleep, but the methods are as diverse as the animal kingdom itself, says Jerome Siegel, a psychiatrist at the University of California, Los Angeles. These variations involve a variety of factors, including sleep length, depth, and how they work in the brain.

From dogs that nap all day long to dolphins that sleep using only half of their brains, let’s take a look at a variety of ways animals can sleep.

Human sleep is as monophasic as other great apes. This means getting one long sleep in a 24-hour period. Bonobos, chimpanzees, gorillas, and orangutans all make beds on trees, avoiding foreign enemies and insects. It’s a bed in a jungle. Gorilla sleeps for 12 hours, but orangutans sleep for about 8 hours, which is almost the same as humans.

In contrast, some primates, like most mammals, have polyphasic sleep, with alternating hours of sleep and activity within a 24-hour cycle. An early study published in the journal Physiology & Behavior found that dogs have a sleep-wake cycle of about 83 minutes, with a 24-hour sleep time of just over 10 and a half hours.

The shorter and intermittent sleep of other monkeys compared to the great apes, which sleep long and luxurious, is related to their bedding. Monkeys must be balanced on hard branches and are easily awakened by signs of danger and other monkeys. While this is convenient, it is not suitable for long sleep.

As the apes’ bodies grew larger, the branches they used to sleep on could no longer support their weight. So they started to build a bed that would support their body. By lying away from disturbers such as dangerous predators, they have created an environment where they can sleep longer, safer and deeper.

A study published in the American Journal of Physical Anthropology in 2015 found that orangutans actually sleep better than their close relatives, the baboons. The study also suggests that orangutans’ cognitive abilities improve the day after long, deep sleep.

Sleep in half of the brain

Dolphins can fall asleep half as deep as their brains. By doing so, it is possible to sleep with one eye open and the predator on the lookout.

This sleep pattern that dolphins share with other whale buddies, manatees, sea lion buddies, and some birds is called hemispherical sleep. This sleep only takes deep slow-wave sleep, which produces slow brain waves, and does not cause so-called REM sleep.

REM sleep refers to a state of sleep in which the brain is active, breathing is relatively fast, and most muscles are temporarily relaxed. It has the characteristic that the eyeballs move rapidly even when sleeping, and it was named REM sleep by taking the acronym of “Rapid Eye Movement”.