Around 470,000 companies have applied for short-time work benefits 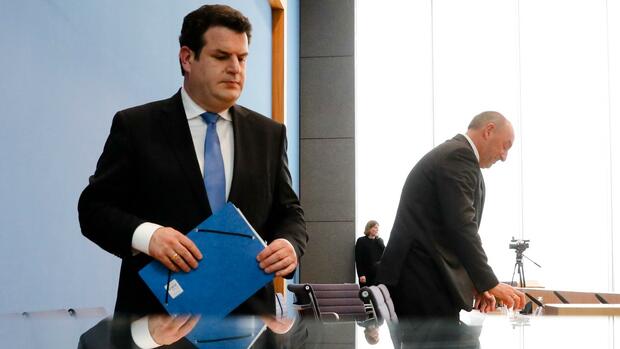 Berlin Usually the same ritual always takes place at the end of the month. Detlef Scheele, head of the Federal Employment Agency (BA), presents the current labor market data with his board colleagues in Nuremberg. A little later, Labor Minister Hubertus Heil (SPD) commented on the data.

That nothing is normal in corona times can be seen from the fact that Scheele and Heil are sitting together at the federal press conference in Berlin this Tuesday. Coping with the virus epidemic is a “historic task,” said Heil.

Health protection is an absolute priority, but at the same time many people fear for their economic existence. “We cannot guarantee every job,” said the Minister of Labor, “but we will fight for every job with the resources we have.”

One of these funds is short-time work allowance, which is designed to help companies get through the crisis without layoffs. In March, around 470,000 job advertisements nationwide responded to short-time work, said Scheele.

Last year, an average of around 1,300 companies reported short-time work per month. In February 2020, the number of short-time work advertisements was 1,900. The comparative figures clearly showed that the corona shutdown was an “abrupt stop” of economic activity that has never been experienced before, Scheele emphasized.

It is difficult to say how much of the indicated short-time work will actually be realized in the end and how many employees will be affected by it, the BA boss explained. That depends, for example, on whether an advertising company has 50, 100 or 1,000 employees and how many of them actually work less.

You also only know when you are billed whether a company really does not work any more in a month or whether only 50 or 60 percent of the work volume is lost.

Minister of Labor Heil, however, expects the number of short-time workers to be “a multiple” of the value from the financial crisis. At its peak in 2009, there were at times around 1.4 million short-time workers.

The example of BMW shows how strongly Corona influences economic life. The car manufacturer alone registered short-time work for almost 20,000 employees in March. Most of them are employed in the Dingolfing, Munich, Regensburg and Leipzig plants, the company said. At BMW, the belts should initially stand still until April 19.

However, Kramer again turned against the unions’ demands that employers should generally increase the state short-time work allowance of 60 and 67 percent of net income. “Anyone who demands this across the board puts jobs at risk in many companies that are unable to do so due to their liquidity shortages,” said Kramer. But there are a variety of solutions in collective agreements and company agreements to avoid hardship cases where this is feasible.

Minister of Labor Heil also appealed to the social partners to increase short-time work benefits wherever possible. He rejected a general obligation, however, because this could exacerbate the need for some companies.

Annelie Buntenbach, board member of the German Trade Union Confederation (DGB), said that not only the companies, but also the employees should come through the crisis without falling. Therefore, employers and the federal government should finally move now and raise short-time work benefits to 80 percent. “Because for many thousands of employees who are not protected by topping-up collective agreements, short-time work means getting along with 60 and 67 percent of their previous net wages,” emphasized Buntenbach. “With very few families, that’s enough to live and rent.

The Federal Employment Agency, with its reserve of 26 billion euros, is well prepared for the crisis, Scheele emphasized. Scheele said that he had already made an unscheduled application for an additional ten billion euros to the Ministry of Labor and the Board of Directors: “Nobody has to fear that they won’t receive any money. Short-time work benefit is a compulsory benefit that is paid out in any case. “

In order to better cope with the expected flood of applications, the employment agencies are increasing the number of employees who account for short-time work benefits from around 800 in normal times to around 4,500. In addition, a good 18,000 colleagues are now active in telephone advice, said Scheele, and there are regularly around 4,000.

The BA had already sent out the latest labor market data for March in the morning. However, they are not very meaningful because the survey ended on March 12 – and thus before the tightened measures to contain the corona epidemic.

BA boss Scheele expects unemployment to increase by 150,000 to 200,000 people in April. But that doesn’t say anything about the year as a whole. In a more optimistic economic scenario, the Institute of Labor Market and Vocational Research (IAB) assumes that the number of unemployed could increase by around 90,000 people on an annual average. In an extreme scenario with a longer shutdown, however, the number of unemployed could increase from around 2.4 million to around three million in the course of the year.

More: Corona Help Guide – How companies and the self-employed can get emergency aid and loans.

Share
Facebook
Twitter
Pinterest
WhatsApp
Previous articlethe responsibility of governments already in question around the world
Next articleVirtual tours (8) Exceptional gardens on the French Riviera
Save 60.0% on select products from SAMMIX with promo code 6018YMV7, through 4/25 while supplies last.