During the Congress of the Argentine Animal Production Association (AAPA), which was held virtually, a Poultry Symposium was organized and coordinated by the Center for Poultry Processing Companies (CEPA). MV Mario Plano, with master’s degrees from foreign universities, invited professor of the Specialist in Poultry Career at the National University of Luján (BA), author of technical works on poultry farming and a professional reference in the activity, addressed the topic Animal Welfare with regarding social demands, focused on broilers.

He highlighted that the weight of the chicken grows 67 times from its birth to its slaughter during 42 days of rearing. The chick is a precocious animal because it can feed itself without depending on its parents, unlike other nesting birds, whose chicks have to be fed in their beaks by their parents in their first days of life. Clarin.

“This precocity allowed its zootechnical development which allowed humanity to reach the current chicken. It has such a characteristic biological rhythm that it generates myths and assumptions that are not correct ”, he pointed out.

He recalled that, in Egypt, 2000 years BC, artificial incubation was already being carried out and explained the development of genetic lines arising from crosses of pure breeds that gave a chicken with hybrid vigor adapted for the development of muscle mass and meat. “Many people believe that bringing these types of animals to outdoor conditions would give them comfort and make them happy. This is a human concept because this animal, placed in the conditions of the pure breeds that were in the field, will be cold in winter and hot in summer, and will not be able to really express all the potential it has, “he said. 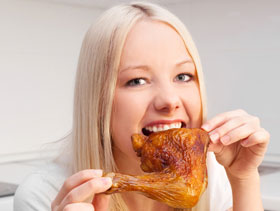 Citizens and consumers
In this sense, Plano said that “the degree of consumer concern regarding Animal Welfare (BA), in the EU, in 2006, was 34%, rising to 57% in 2016, while, in Great Britain, this concern increased, in the same years, from 20 to 78%, respectively. And he cited a survey on how consumers and citizens think.

The citizen is important because “it is the basis of political thought and the basis of many sciences. Citizens in general are 73% interested in BA, but when buying, as consumers, only 39% think about BA “, he said.

“Not only should it be reported on the packaging that companies develop a BA plan but also make it known to society, so that they see that animal welfare is part of the industry,” said Plano, who added that “in Europe only a minority (3%) are willing to pay prices higher than 20% for doing BA and 35% are not willing to pay any increase “. Meanwhile, he cited a 2018 study by the US National Chicken Council (NCC), which revealed that 75% of consumers were concerned about how broilers were raised.

Plano differentiated rights, protection and BA. He said that “animal rights include legal, philosophical, ethical and moral aspects. Animal protectionism is a social action and corresponds to the study of social psychology and sociology, and the BA is based on scientific aspects, and is a specialty within the scientific knowledge of animals ”, he pointed out.

As for the factors to take into account when talking about BA, he mentioned ethical aspects, since the bird, although it does not express pain, its nervous system does make it feel like a defense mechanism ”. He cited a British study according to which the time that elapses between a chicken receiving a painful stimulus (prick) and its nervous registration in the brain is between 100 and 150 milliseconds. “This is important to know at the time of stunning (sacrifice) in a slaughter plant and also when doing euthanasia,” he said.

Among the social aspects, Plano explained that “there are organizations for the defense of animals with a high impact on public opinion without scientific support and we (the poultry industry) are in charge of letting you know what the scientific support is when we talk about BA” .

Regarding the economic aspects, he said that animal abuse leaves traces in slaughtered birds that deteriorate their quality, and affects productivity. And as for the commercials referring to BA, he pointed out that “our clients request that we show them that we take care of BA, because they suffer boycotts by their customers from the fast food chains, and those establishments have to certify and demonstrate that they work with companies that take great care of the BA, with which they send audits (to the industry) to certify it ”.

He mentioned regulatory aspects, including the international standards of the OIE and the EU and the NCC. He cited regional regulations such as resolution 575/2018 of Senasa, in Argentina, although most countries adhere to the OIE and cited aspects inherent to exports, which require the same BA standards that countries have to apply in the country. of destiny.

Knowledge and parameters
Plano reiterated that “the establishment of BA norms must be based on scientific knowledge and not on anthropocentric concepts. Not believing that chicken is happy because I am happy in a certain way. This knowledge is based on the knowledge of animal physiology, ethology (animal behavior) and the state of health of birds ”.

In this sense, he stressed that the poultry industry complies with the zootechnical and productive parameters, bird integrity (neither injured nor fractured), the health and immunocompetence of the birds. He added that BA must be measured and documented, especially deviations and corrective actions. And that the staff must be permanently trained, both those who are in contact with the birds and those who do programming and logistical tasks.

See also  The 7 most difficult dog breeds to care for

He recalled the 5 freedoms described about the animal BA internationally:

He also mentioned a standard from the OIE (Animal Health Organization, which establishes measurable criteria and recommendations to measure BA) that says that “an animal is in a state of well-being if, as indicated by evidence, it is healthy, comfortable, well nourished. , safe and capable of expressing his innate behavior, and does not suffer unpleasant states such as pain, fear and anguish ”.

As measurable criteria, he cited mortality, discard, feed conversion, daily weight gain and the productive efficiency factor linked to the standards of the genetic lines with which each farm works. He also cited a locomotion test (birds with walking difficulties) that has international standards that the industry must meet regarding BA or take corrective action.

Likewise, in the slaughter plant, contact dermatitis is measured as well as the state of the feathers that show the state of BA and the corrective actions that should be taken in the environment where the birds are raised, as well as the incidence of diseases. and the index of injuries, fractures and conditions of the eyes, which indicate how the birds are being raised, explained Plano.

Vocalization
The criteria for evaluating animal behavior are fear of escape and vocalization. “There are 30 words that broilers can emit, those of us who work in the sheds know many of them and there are studies in different universities that measure these vocalizations, there are even different ones to determine different diseases. It is something measurable by the person who manages the birds and can record it in the certificate of visit to the sheds ”, he explained.

The OIE also determines the spatial distribution of birds, panting and wing spread indicating heat stress or adverse environmental conditions, such as high ammonia level, bed bathing, which is a very intricate behavior of the bird, that allows it to have healthy skin, the free flapping that is part of animal behavior, the pecking of the ration and the pecking or cannibalism, since the birds are related to each other as dominant and subordinate, and they communicate through the emission of sounds and by a slight pecking in the tail feathers. When this is exacerbated, it must be corrected with the density of animals per m2 or by adjusting the levels of amino acids or salt in the air ”.

There are recommendations on biosecurity, “something that poultry companies have to do as a corporate policy that is part of the BA: the environment and management, air quality, lighting, noise with the permitted concentrations of ammonia, the indicators that must be taken into account to know that the environment is correct, animal management and health, preventive medicine and veterinary treatment, all documented and approved by a competent professional, as well as the nutrition, quality and availability of water, with food formulas documented and endorsed by a nutritionist, “said Plano.

See also  Terranjou. Play sports with your dog this Sunday

They are requests from the OIE and all audits that require flow meters on farms, to know the consumption and also eventual water losses. “There are prodomic signs of the disease that lower water consumption, a measure that indirectly measures food consumption,” he explained. He also cited the OIE recommendation regarding protection against predators and integrated pest management that is part of biosecurity and BA.

Alternative systems
Plano argued that “making alternative production systems does not mean that we are doing BA”, but only a different system for people who “have a certain taste about the conditions in which the birds are raised.” In this regard, he pointed out that “there are also rules for these alternative systems.” This is how he named the enriched farms and the “free range”, part in the shed and part in the open air, and others in the field.

The former are traditional sheds, in which measures are taken to keep chickens active under a roof, by enriching the environment. “Word Animal Protection has determined that this system costs 13% more, with which consumers who want this type of chicken must be willing to pay that cost.” He explained that this system serves to improve the behavior of birds, foraging and locomotion, minimizing harmful pecking.

These sheds are enriched by providing the birds with bales of hay or grass every 1,000 chickens, placing suitable perches according to the weight and size of the birds (2 m per 1,000 birds) and leaves of vegetables for them to scratch on the litter. These are the BA parameters for these facilities.

The “free range” has part of the birds housed (aviaries) and part in the open air. Chickens can gain access to the outdoors if they have sufficient feather coverage and are developed enough to get out safely and with enough outlet areas. Here the risk of disease exposure must be reduced, “one of the weakest points in the system,” according to Plano, because “birds come into contact with wild birds, especially in countries where influenza (avian) is prevalent and -on all aquatic ones – have a high prevalence of this disease ”. Outdoor areas should be established on well-drained ground, provide shelter for chickens, and be free of toxic and predatory plants, as well as having protection against adverse weather conditions.