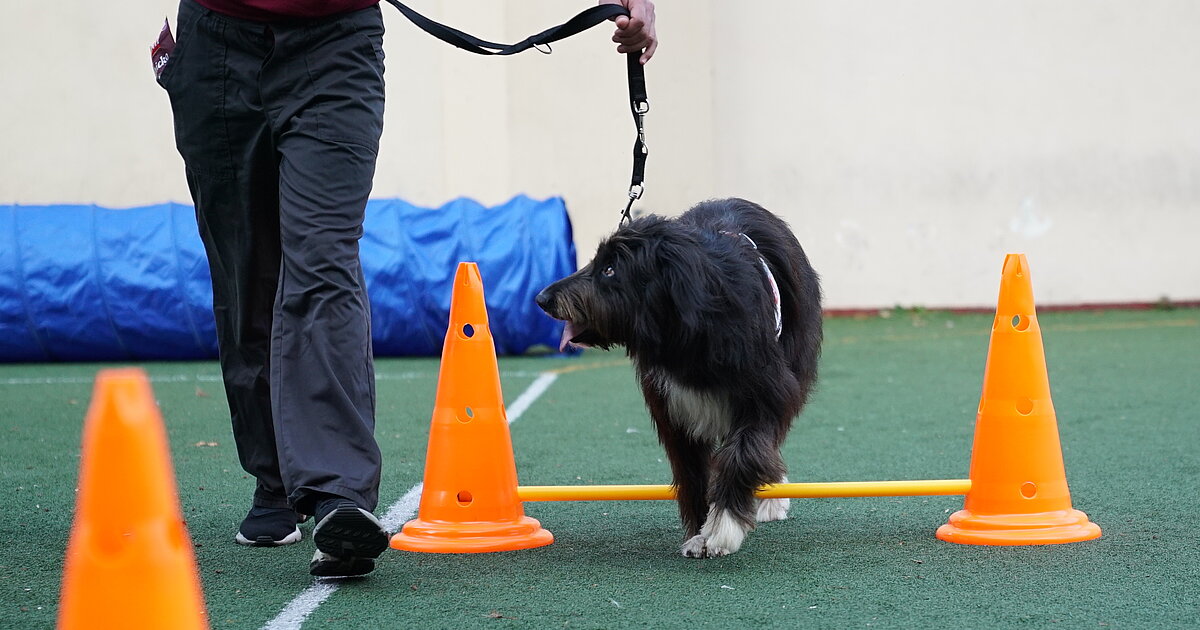 “If you take a bit of food in your hand, it will definitely work better. That’s a Labrador, there’s always food,” Lisa Bill from the Malteser calls to the inmates of the Limburg correctional facility. He is trying to slalom around the other dogs with his dog Bailey. But the playful Labrador with beige fur keeps going somewhere else. Until the prisoner reaches into his pocket and bait him with treats. Suddenly Bailey doesn’t leave his side anymore.

Every two weeks, volunteers visit selected prisoners in Limburg Prison with their dogs and lend them their four-legged friends for an hour. During this time, they can train with the dogs under the guidance of a volunteer – similar to a dog school. For the prisoners, the Malteser Visiting and Accompanying Service with Dog (BBD) is a welcome change from everyday prison life. More than 50 men are being held in custody at the Limburg JVA – from petty criminals to murderers. For many inmates there is a so-called incarceration shock at the beginning, explains Mandy Texter, head of the social service in the prison. “This means that the inmates first have to get used to everyday prison life. Meeting the dogs can make a valuable contribution to this,” she says. Furthermore, the interaction with the dogs should also contribute to rehabilitation. The social service oversees the Malteser project in the prison and accompanies the visits.

The artificial turf in the inner courtyard of the JVA offers enough space for training. When the dogs come, there are always many obstacles set up: orange cones, hurdles at different heights or even a blue tunnel tent. The obstacles contrast with the dreary, meter-high walls with barbed wire that surround the artificial turf on three sides. The fourth side is the building itself. Every now and then a face flashes through the countless windows with bars. No wonder, because there is a lot going on on the artificial turf. Bailey isn’t the only dog ​​this Friday. Four other dogs came with him: Dachshund Fine, Viszla Paul, mixed breed Nelli and Havanese Rocky. A correctional officer is present throughout the visit and guarantees security.

While the dog owners are chatting to the side, Lisa Bill already has the next task ready for the prisoners: they are to guide the dogs through the tunnel tent. The prisoner, who chose Viszla Paul today, lures the four-legged friend to the tent entrance with a treat. “Come on Paul,” he says, but Paul is still struggling a little. “He’s being used as a visiting dog for the first time today,” explains Lisa Bill. After a few tries, the brown Viszla understood and ran through the tent several times.

See also  They ask for help to find Manuela, a lost gauge in Actur (Zaragoza)

The volunteers from the Maltese Dog Visiting and Accompanying Service with their four-legged friends in front of the prison in Limburg.

The dogs are trained for such visits. Even if in principle every dog ​​can take part in the Malteser offer, a little training is mandatory. This includes a theoretical and a practical part. “The dogs carry out harassment exercises and get to know frightening situations. Because we also visit old people’s and nursing homes, they are also introduced to walking aids, walkers and wheelchairs. And the owners are also trained so that they can recognize when the dog is under too much stress and should be better taken out of the situation,” explains Silke Kaltwasser. She runs the visiting and support service on a voluntary basis. Her Havanese Rocky is also there that day.

“So, in ten minutes you’re going back to the cells,” calls the prison officer. “You’re free to spend the rest of your time with the dogs,” says Lisa Bill. While the inmate tries the hurdles again with Viszla Paul, the mixed-breed dog Nelli is spoiled with cuddles. Then the hour is up. The correctional officer takes out his key and unlocks the door that leads to the cells. The prisoners go back a little wistfully. One looks around for the dogs again before the JVA officer closes the door behind him. Only when it is guaranteed that the inmates are safely locked in their cells again are the volunteers from the Malteser Visiting and Accompanying Service allowed to leave the prison with their dogs and be free.