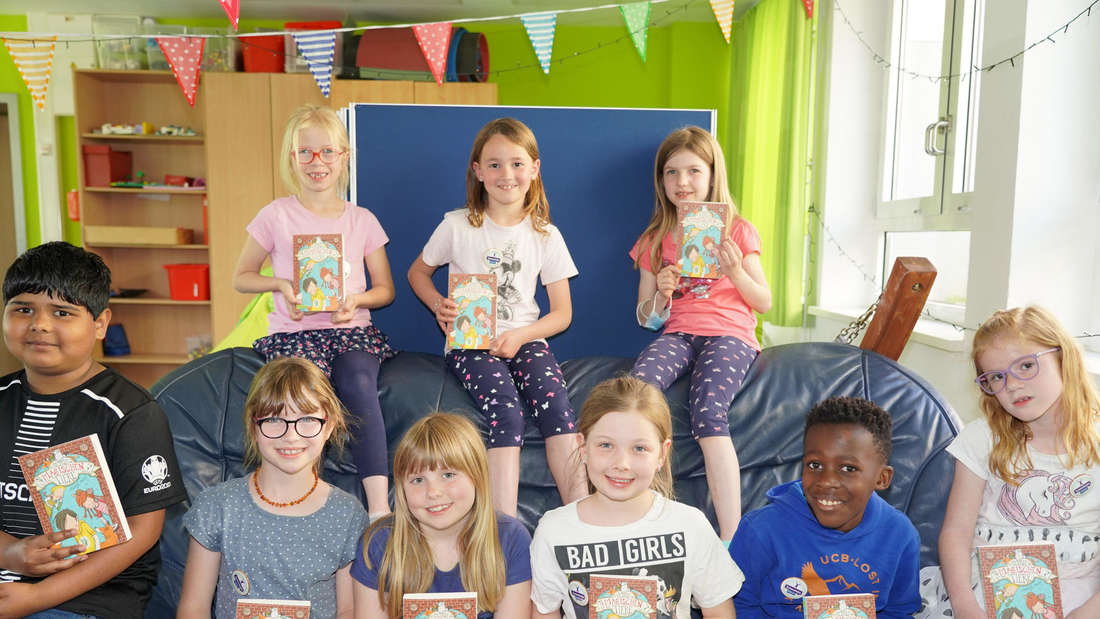 A secret companion who understands, accompanies and protects you. That would be amazing and magical. In the book series “The School of Magical Animals” by Margit Auer, which was recently filmed for the cinema, this dream comes true for children at the Winterstein School. The Ober-Mörlen children love these books. And also because her school has the same name as in the books.

In the early Thursday afternoon, browsing is always the order of the day at the Winterstein School in Ober-Mörlen – that’s when the Reading Club (LC) meets. “This six-month period is all about Margit Auer and her books,” says deputy director Charlotte Blecher, who runs the club. Auer is the award-winning author of the children’s book series »The School of Magical Animals«, in which each child is gradually given an animal. Whether Eugenia the bat, Rick the crocodile, Cooper the rat or Tingo the chimpanzee – the animals suit the children who own them. They become their best friends, they talk and adventure with them. What is special about the Ober-Mörl elementary school students is that they have the same name, because the school is also called the Winterstein School in the book. The series of books plays a role in everyday school life in Ober-Mörlen and is read aloud during the breakfast breaks of the first two years.

There are also two classes that have stuffed animal mascots: Rabbat the fox and Yuri the penguin. A few classes went to see the film, which was released in cinemas last fall. »The cinema in Butzbach was amazed to hear that we are the Winterstein School and surprised us shortly after our visit with a great package full of fan articles for the film«, says teacher Blecher.

Some AGs are more frequented than the LC, which the Reading Foundation supports with book packages and materials. “There are children who no longer have any books at home, but only read them on a tablet or PC,” says Blecher. In this six-month period, however, nine children have registered because of the topic.

“I think it’s cool to go to the Winterstein School,” says eight-year-old Lilia.

She likes the book series. Evelin became aware of the same name when she changed schools. The eight-year-old and most of her clubmates know all the titles in the series. Finja and Luisa (both 8) describe what they like so much about the books. “I think it’s good that animals can help people so well, they’re special animals,” says Finja. Luisa also likes that the animals can talk – but only with the child they belong to. “The child and the animal are companions,” she says.

Lilly (8) has an animal at home, a dog named Pepper. “I love dogs more than anything,” she says. Leo would also like to have a real animal – a dog, as the eight-year-old says. Anna-Luise (8) has a lot of fish in the pond at home and has experienced something sad as a result. “Suddenly everyone was gone, caught by the heron. That was really stupid.«

Anna-Luise is already an active writer, for example when she designed her own newspaper last year and the WZ mentioned her as a “newcomer reporter”. Evelin and Lilia also design books for their family. “I want to make them exciting. I once gave my mother two crime novels for her birthday,” says Lilia.

See also  How to identify a cruelty-free product? - The Sun of Mexico

Due to the corona, activities related to animals were canceled during the pandemic, such as a visit to the zoo. “But soon the second graders will be doing a butterfly project, where we’ll see how a caterpillar pupates and becomes a butterfly,” says Blecher, head of the reading club.

through together thick and thin

In the series “The School of Magical Animals” there are also favorite books. Joyal, whose big hobby is football, liked Volume 1 about Rabbat the fox the best.

Bella, who turned eight on the day of the WZ visit, likes Volume 10 »There and Away« best. “A boy gets a guinea pig. At first he wanted to exchange his magical animal, but then they became friends after all,” she says. Love for animals, a snappy storytelling style and going through thick and thin together.