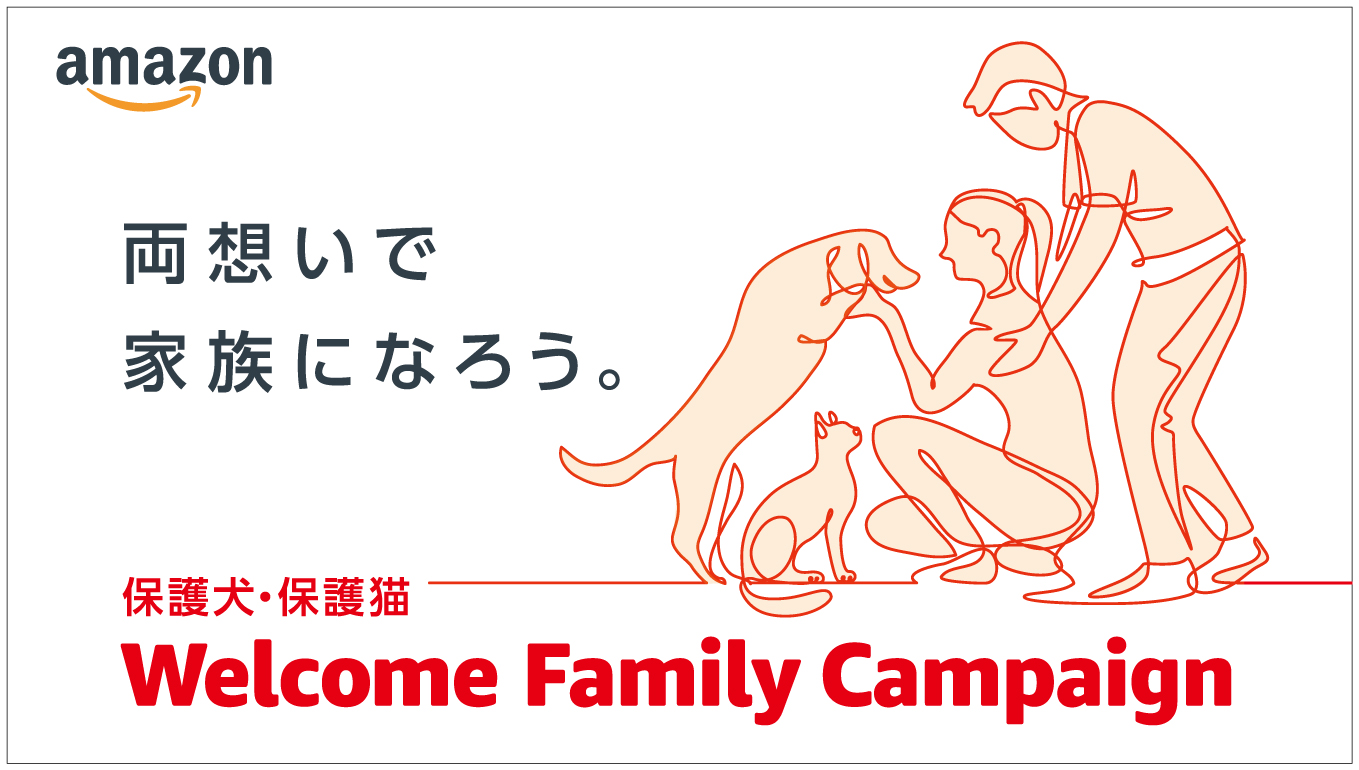 As part of the partnership project “Ties that Connect, Life that Connects” launched by the Ministry of the Environment in August 2021, Amazon has established Animal Donation, a public interest association of organizations and companies related to rescue dogs and cats, and Do One Good, a general incorporated association. , With the support of PETOKOTO and the support of pet-related product manufacturers, the “Protection Dog / Protection Cat Welcome Family Campaign-Let’s be a family with both feelings-” was held on September 20, 2022, the first day of Animal Welfare Week. announced to start.

Through this campaign, Amazon promotes awareness and correct understanding of the protection and transfer of dogs and cats, and by improving the image, it is wonderful to “become a family with mutual feelings” with rescued dogs and rescued cats. We are aiming to create an environment where more people can share the recognition that adopting a dog or rescue cat and becoming a family is one of the natural options.

「As the first partner of the Ministry of the Environment’s partnership project “Connecting Bonds, Connecting Life”, we are very pleased to be able to start new initiatives with many rescue dog and rescue cat related organizations, companies, and pet-related product manufacturers. This initiative will help promote the transfer of rescued dogs and rescued cats, and we will strive to contribute to the creation of a social environment where humans and dogs and cats, who are good partners, can live together in health and happiness.」

The online program “Amazon presents ‘Miyazon Principal’s Welcome Family Gakuen'” commemorating the start of the campaign will be released on October 2nd at 19:00 on Amazon Japan’s official YouTube channel and official Twitter (@AmazonJP).

In the program, comedian Anzen Manzai Miyazon who lives with a former rescue dog “Love” plays the role of the principal, and model/actress Asuka Kijima who lives with her two love cats “Taiga” and “Towa” is a student. Appearing as a role, while learning about the transfer of rescue dogs and rescue cats, it is said that he will think about the meaning of “become a family with both feelings”.

In addition, it will deliver a lot of content, such as proposing new nicknames for owners who welcome rescue dogs and cats. The program is full of the performers’ love for dogs and cats and Miyazon’s unique sense of humor. It is said that it provides an opportunity to think about the importance of things.

The new nicknames selected after screening will be announced at the “Welcome Family Award” event scheduled to be held later this year, and will be adopted in subsequent activities. is scheduled to be presented.

He wants to make more people aware that “it’s wonderful to have a rescue dog or cat and become a family member, and it’s one of the options.”

From September 20th to October 16th, we are looking for people who have experienced adopting a rescue dog or cat to themselves, their families, or friends. .

You can apply for the story in the note official contest and Twitter (@AmazonJP). note In the official contest, the story selected after the screening will be announced at the event “Welcome Family Award” scheduled to be held within the year, and the selected contributor will receive an Amazon gift certificate and pet supplies. .

In addition, the story selected in the note official contest will be published as a book by Kindle Direct Publishing in 2023, and the sales will be used for animal welfare through the public interest incorporated association Animal Donation. In addition, 50 pet supplies will be presented to those who applied on Twitter by lottery.

3. Donating a portion of the sales of eligible products sold on Amazon.co.jp to animal protection groups in the “Protection Dogs and Cats Donation Campaign”

With the cooperation of supporting manufacturers, we are also implementing new measures to support animal protection groups. From September 20th to November 30th, if you purchase eligible products from participating manufacturers from the campaign page, you will receive an Amazon gift certificate equivalent to 1% of the sales during the period. It is said that it will be delivered to an animal protection group that is doing it.

A wide range of pet products such as pet food, toilet supplies, toys, snacks, and pet home appliances are targeted for the campaign so that the daily shopping of many users will lead to the support of rescued dogs and rescued cats.

4. Participate in the “Animal Kindness Week Central Event” and “2022 Animal Appreciation Day in JAPAN” scheduled to be held on October 1st.

In addition to holding a stage event at the “Animal Welfare Week Central Event” to be held at Ueno Park in Tokyo on October 1, Amazon will have a booth at “2022 Animal Appreciation Day in JAPAN”.

At the booth, along with announcing the campaign, we are planning to present pet supplies from supporting manufacturers to those who participate in the above measures on the day.

Five. “Welcome Family Award” to recognize celebrities who embody the concept of “become a family with mutual feelings”

In addition to the announcement and commendation of the “Welcome Family Story” selected from the note official contest and Twitter entries, new nicknames representing the owners of rescue dogs and rescue cats, living with rescue dogs and rescue cats, “Family with mutual feelings” It is said that the event “Welcome Family Award” will be held within the year to honor celebrities who embody “Become”. Details of the event will be announced as soon as they are decided.

The results of the “Survey on protected dogs and cats” conducted by Amazon in August 2022 revealed that there is a lack of awareness and understanding of the protection and transfer of dogs and cats. Through this campaign, which will be launched based on this result, Amazon aims to create a social environment in which transfer becomes one of the natural options.

Acceptance of rescue dogs and cats, which has not yet become a common option

・When thinking of getting a dog or cat, 54.0% of the respondents answered that they would look for them at a “pet shop”, and 37.7% answered “animal protection groups.”
・More than 80% of the respondents answered that they “do not know the specific activities of animal protection groups, but do know of their existence” and “do not know anything about them at all”.

Despite being positive about accepting rescued cats and dogs, the reality is that they do not know how to accept them.