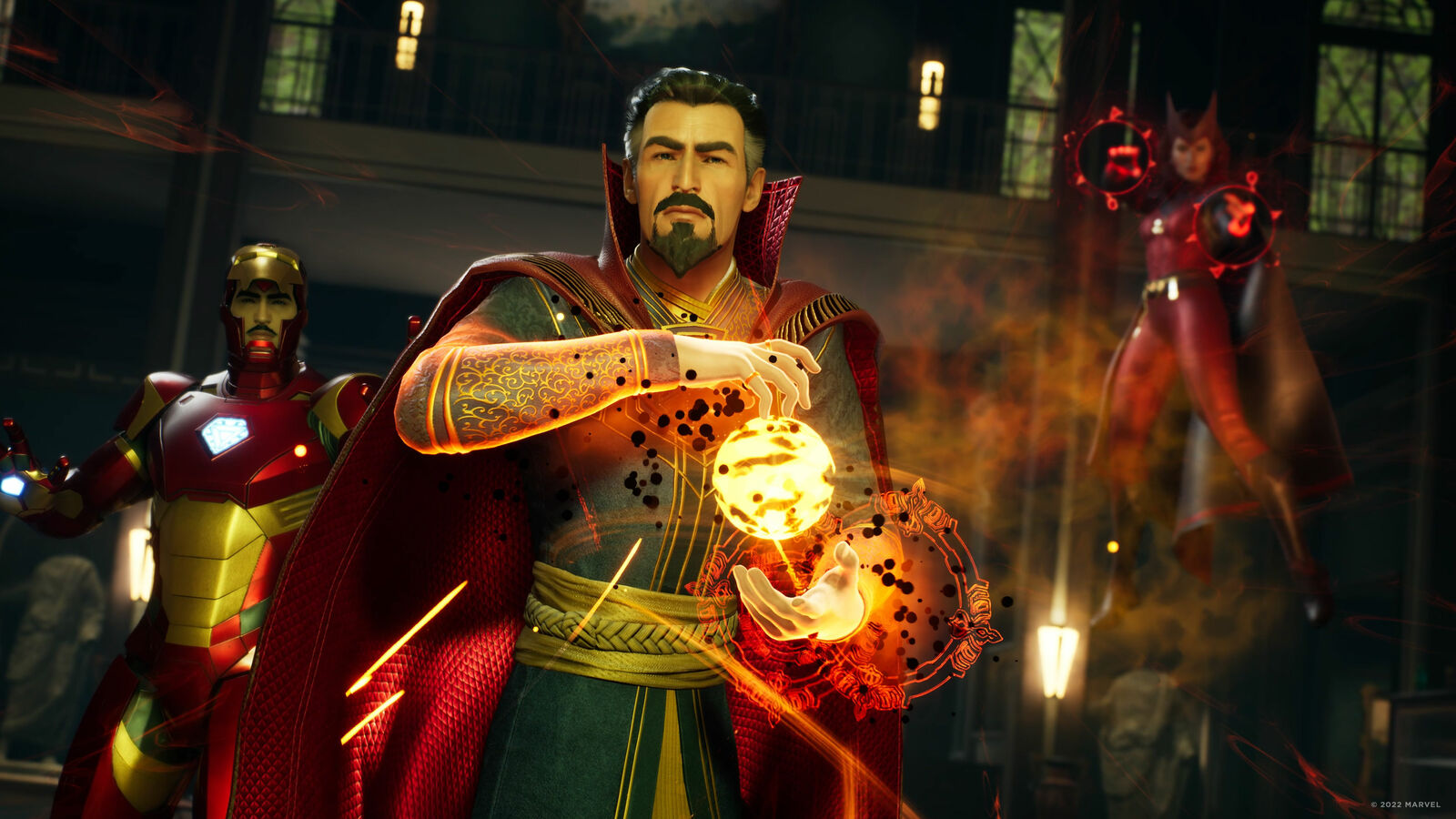 December 2022 is set to be a solid month for major game releases, despite a lack of volume. The quality here more than makes up for the quantity, with a range of blockbusters rounding out a great year for gaming. On the AAA front, we’ve got some real heavy-hitters in the form of The Callisto Protocol, Marvel’s Midnight Suns, and Crisis Core – Final Fantasy 7 – Reunion, the long-awaited next chapter in the remastered Final Fantasy 7 saga.

We’ve also got other potential hits on the way, including the neat-looking Dragon Quest Treasures, the overtly silly space exploration game, High on Life, and even an exciting Aussie hit, in the form of Sports Story for Nintendo Switch.

Here’s all the major video game releases to get excited about in December 2022.

If you like your horror gory, slimy, and spacebound, then The Callisto Protocol is for you. This survival-horror title stars a freight transporter (Jacob Lee, played by Josh Duhamel) working to supply shipments to disparate space stations. As you might expect, one of these stations – the Black Iron Prison – is infested with all manner of ghoulies. It’s up to Lee to fight his way through zombie-like hordes as he attempts to survive a horrific crash landing, and escape with his life.

Along the way, infected inmates will ooze their way along Lee’s path, requiring deployment of deadly weapons, and plenty of luck to survive. If you don’t, you’ll be treated to one of many gruesome death animations as Lee perishes in a hostile world. No pressure!

Marvel’s Midnight Suns is set to launch on PC and consoles in December 2022 – as of the biggest game releases of the month. Not only is this a major Marvel game adaptation, it’s also coming from Firaxis, the beloved creators of the rebooted XCOM series. With snappy combat, a cast of loveable characters, and plenty of supernatural antics involved, it’s likely to be the dominant game of December.

We were able to get hands-on with the title ahead of launch, and came away impressed by everything on offer – including the relationships that bloom along the way. You can check out our game preview below:

Children in your neighbourhood are going missing – and your creepy neighbours are the only suspects. There’s one thing to do: put on your investigative journalist hat, and set off on a spine-tingling stealth journey to discover the truth behind the disappearances, and thwart your neighbours’ plans. This sandbox puzzler features an AI that learns from your movements, so there’s no way you can save the neighbourhood twice the same way.

You’ll need to explore a horror-like world, noting where you can run to – and where you can hide. Get around the game’s AI, and you’ll uncover plenty of secrets… but if you fail, watch out for your life. In Hello Neighbor 2, your neighbours are smarter and more entrepreneurial than before, and victory will be hard won.

If you’re longing for some Mario Kart racing goodness, stay tuned for December. Wave three of the Booster Course Pass officially launches on 7 December, and it adds in a number of excellent returning courses. Maple Treeway from the Wii version of Mario Kart is a clear standout, but the Tour tracks – London Loop, Berlin Byways, and Merry Mountain, should also add a solid helping of joy.

Merry Mountain, of course, is perfect for the December period, and should make your karting a little bit more festive.

While this Booster Course Pass wave isn’t technically part of the month’s new game releases, it’s an essential bit of DLC that should spice up your next round of Mario Kart.

The premise of this title is simple: you take the child-friendly, wholesome approach of Thomas the Tank Engine, and you run it through a terrifying Stephen King-esque horror story generator. What results is Choo-Choo Charles, a horror survival game where players are tasked with escaping from and defeating a giant, sentient spider-train.

When you’re not busy scaring yourself silly being ambushed by Charles, you’ll spend your time gathering items to strengthen your train and equipment, building out your capabilities, and hoping for the best. As soon as you hear the skittering, metallic feet of Charles, it’s time to fight – and whether you survive or not will be up to your fortitude, ingenuity, and foraging skills.

Dragon Quest Treasures is very cute spin-off from the mainline Dragon Quest series which sends players on a grand journey to defeat tough monsters, and discover the best treasure around. The game appears to be a newcomer-friendly entry in the Dragon Quest series, with only hints at lore and characters from Dragon Quest XI to contend with. The focus here is on fun exploration, hunting treasures, and forging friendships with an array of companions along the way.

If you’ve ever been curious about Dragon Quest, or you just want to spend time in a colourful little world, then Treasures looks very endearing, and very entertaining. It also looks fairly light-hearted when compared to the sweeping narratives of the mainline DQ series – and could present a more relaxing narrative.

At the conclusion of Final Fantasy 7 Remake, Crisis Core protagonist Zack Fair made a cameo appearance, seemingly in a vision. Those unfamiliar with the original Final Fantasy 7 story likely came away confused by this segment – but Crisis Core should clear up those gaps, and give a better idea about Zack Fair and his place in the series’ mythos.

This remastered version of the original PSP game will retell the origins of Fair, SOLDIER, Sephiroth, and other essential characters, and lead into the next major chapter in the Final Fantasy 7 Remake saga. While it won’t be an essential title to understanding the next game, it is an important bridge and should illuminate the future of the franchise.

High on Life is a space exploration game that seems to be designed in the vein of The Outer Worlds, Journey to the Savage Planet, No Man’s Sky, and other recent hits – but with wacky talking guns, slapstick humour, and plenty of absurdity on board, it promises a space romp that’s a bit weirder. Every time you shoot something, your gun has something to say. Every world you visit, there’s stranger and meaner aliens.

No step into this world is silent – making the action a cacophony of annoying, over-the-top, hilarious voices, and plenty of cringe-worthy moments. If you’re somebody who enjoys Solar Opposites or the ever-popular Rick & Morty cartoons, the antics in High on Life will likely be for you.

The Witcher 3 (Next Gen)

December 2022 might be the perfect time to revisit The Witcher 3, because amongst a range of brilliant game releases, we’re also getting a shiny ‘next gen’ remaster of this award-winning adventure. New content will arrive for existing game owners, in the form of a new update that refreshes textures, adds in new Netflix-based content, and reinvigorates the world of the game. Grasses are greener, skies are bluer, and Geralt has more skin definition than ever.

It might make you tempted to take this game for another spin – and you should. While The Witcher 3 is now several years old, it remains a brilliant fantasy adventure worth revisiting. It was already one of the prettiest games of the PlayStation 4 and Xbox One era, and should be doubly so on next gen consoles.

See also  NieR: Automata The End of YoRHa Version Nintendo Switch Overview - Is It Worthy of It? - Nintendo Lifestyle

Those on Windows PC will also get the new update, which should refresh textures and add in a range of new features, including Photo Mode.

Lil Gator Game should be a palate cleanser after a tough month largely dominated by horror and horror-adjacent games. In this delightful-looking tale, you play as a small alligator wandering a bright, wholesome world filled with other anthropomorphic animals. Armed with only very small weapons, you’re tasked with wandering a wide open world, looking to ‘bop cardboard baddies’.

If that isn’t the cutest thing you’ve ever heard, we’ll eat our hat. With a light focus on combat and exploration, this game is essentially a sunny sandbox, where you can explore and gather quests to your heart’s content. Wander through mountains, make friends, and stomp your way through the world, and even if you don’t find everything this game has to offer, you’re near-guaranteed a relaxing time.

Aka is another wholesome, animal-starring game that’s likely to rock this December’s game releases. In this warm story, you play as a red panda looking to find a slice of peace in the world – despite the forces of evil attempting to derail their plans. In Aka, you’ll fight to relax, with wholesome activities including crafting, farming, and questing often interrupted by the demons of Aka’s past.

Inner peace is hard to find – but if you get through enough quests, and discover the true meaning of happiness, you’ll eventually find yourself on a wholesome path. Along the way, you’ll meet plenty of cute creatures, including a giant capybara, and unlock new, more colourful regions.

Sports Story is the long-awaited sequel to the Australian-made hit, Golf Story, and is arriving exclusively for Nintendo Switch in December 2022. At this stage, the game is not firmly dated, although its launch was recently confirmed in a Nintendo Direct. After several years in development, it’s finally ready to make its mark amongst the December game releases.

While Golf Story focussed on golf alone, this major sequel expands on gameplay in a major way, introducing a variety of sports to master. You’ll be able to take part in soccer matches, fishing tourneys, volleyball and more, with each sport serving as a backdrop for a major adventure. And when you’re not sporting, you’ll be crawling through dungeons, completing epic quests, and learning more about yourself in the process.

Stay tuned to GamesHub for more on the upcoming game releases of December 2022.

GamesHub has affiliate partnerships. These do not influence editorial content. GamesHub may earn a small percentage of commission for products purchased via affiliate links.