The well-known Ukrainian producer and TV presenter Igor Kondratyuk sharply commented on the possible concerts of Ani Lorak in Ukraine, which she announced for the spring of this year. Kondratyuk’s comment appeared under a Facebook post by composer and producer Oleksandr Yagolnyk about possible concerts by the Ukrainian artist, who has recently been living and performing in Russia.

“I consider the concerts announced by her a kind of test. If everything goes smoothly for her, then in a year we will have Russian stars performing much more actively. First there will be Lorak and Loboda, and then Kirkorov and Morgenstern will arrive, ”said Yagolnik.

The producer also expressed hope that other artists from Russia would not come to Ukraine with concerts. 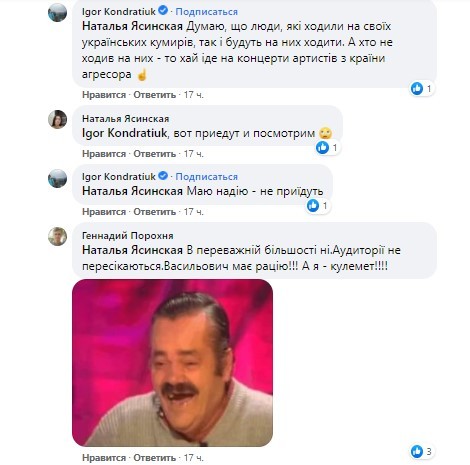 Further, in the comments, a discussion unfolded about whether artists who are building a career in Russia should travel to Ukraine with performances, and whether this will affect attendance at concerts of Ukrainian stars.

According to Igor Kondratyuk, in any case, such visits will not affect Ukrainians, since they have their own audience, which does not overlap with fans of Russian stars.

Recall that the petition to restrict the right of entry into the territory of Ukraine of citizens of the aggressor state of the Russian Federation gained the necessary 25,000 votes of support in 10 days.

The petition on the President’s website says that in order to protect the citizens of Ukraine and the national security of the state in the context of the ongoing armed aggression of the Russian Federation against Ukraine, it is necessary to impose a ban on citizens of the Russian Federation to visit the territory of Ukraine or introduce a visa regime.

After the petition on the president’s website gains the necessary support, it must be considered by the head of state.

At the end of October, Zelensky responded to a petition regarding the tour of Russian artists.

As you know, on September 21, Kondratyuk filed a petition with a request to completely ban the concert activity of artists from Russia until the return of the occupied Crimea and the resumption of control over Ukraine’s eastern borders.

The petition on the president’s website received 25,000 votes. Therefore, Vladimir Zelensky should have considered it.

Kondratyuk told which artist provoked him to file a petition to ban concerts by artists from Russia. According to Kondratyuk, the performance of the Russian rapper Basta was “the last straw” for him.

Recently, the Russian singer Pelageya was banned from entering Ukraine.