For companies, R&D is a “double-edged sword”. When used well, the future return on R&D technology will greatly exceed the capital resources invested in R&D.However, if R&D itself is a risky corporate behavior, it is also possible that after investing heavily in R&D, the investment will reach the level and have a negative impact on the corporate financial report.

But from the perspective of our ordinary consumers, the R&D between car companies represents the degree to which car companies attach importance to technology, and is reflected in the quality of the entire vehicle. Car companies that focus on research and development can make their vehicles more affordable to consumers. trust.

A few days ago, some media collected statistics on the group’s R&D situation disclosed by some domestic car companies in 2020. To everyone’s surprise,SAIC Group’s R&D investment has reached a staggering 14.967 billion yuan, which is the “top one” of the ranking. 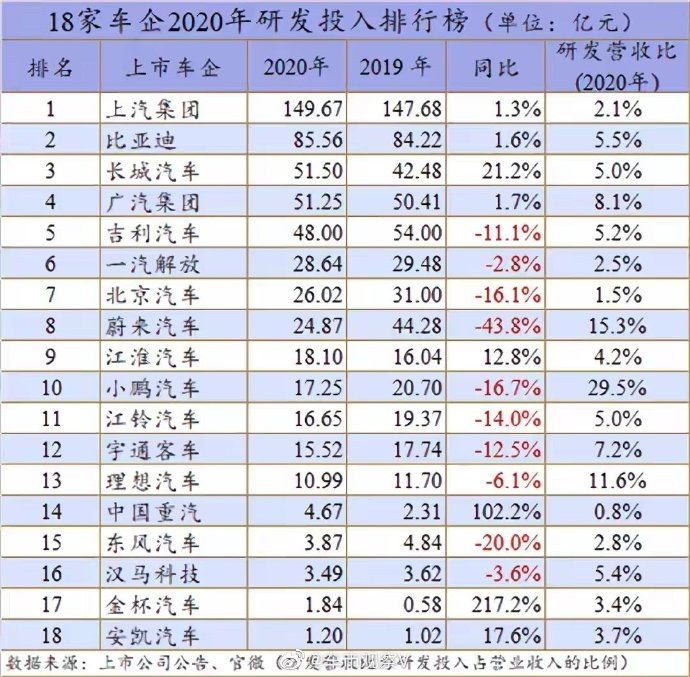 The second place is BYD, whose R&D investment is 8.556 billion yuan, and the R&D revenue ratio is 5.5%.As the leading brand of new energy vehicles in China, BYD has invested extremely heavily in research and development, and the results produced are also very gratifying.

Including the “blade battery” that “never spontaneously combusts”, the Qin Plus DM-i equipped with a DM-i hybrid system has a minimum fuel consumption of only 3.8L per 100 kilometers and an acceleration per 100 kilometers of 7 seconds.These will be used as core technologies to provide continuous competitiveness for BYD’s development in the next few years.

See also  Deceptive calls to boycott 7-Zip • The Sign up

From one perspective, BYD’s R&D investment is already the sum of the R&D investment of car companies such as Xiaopeng, Weilai, and Ideal, which more intuitively reflects BYD’s attitude towards R&D.

Ranked third, fourth, and fifth are Great Wall, Guangzhou Automobile Group and Geely Automobile, with R&D investment of about 5 billion yuan, and they are representative companies in the camp of domestic automakers.

It is worth mentioning that the current domestic automobile has begun to accelerate the transition to new energy and intelligence. The traditional car-making thinking of guaranteeing the three major components of a vehicle may no longer be the optimal solution in the current market environment.

As a result, major auto companies have increased their R&D investment and continue to attach importance to the improvement of intelligent and comfortable configuration, which has become the first choice of many auto companies.