“Strange”, when the Avignon Festival speaks of Eros and Thanatos 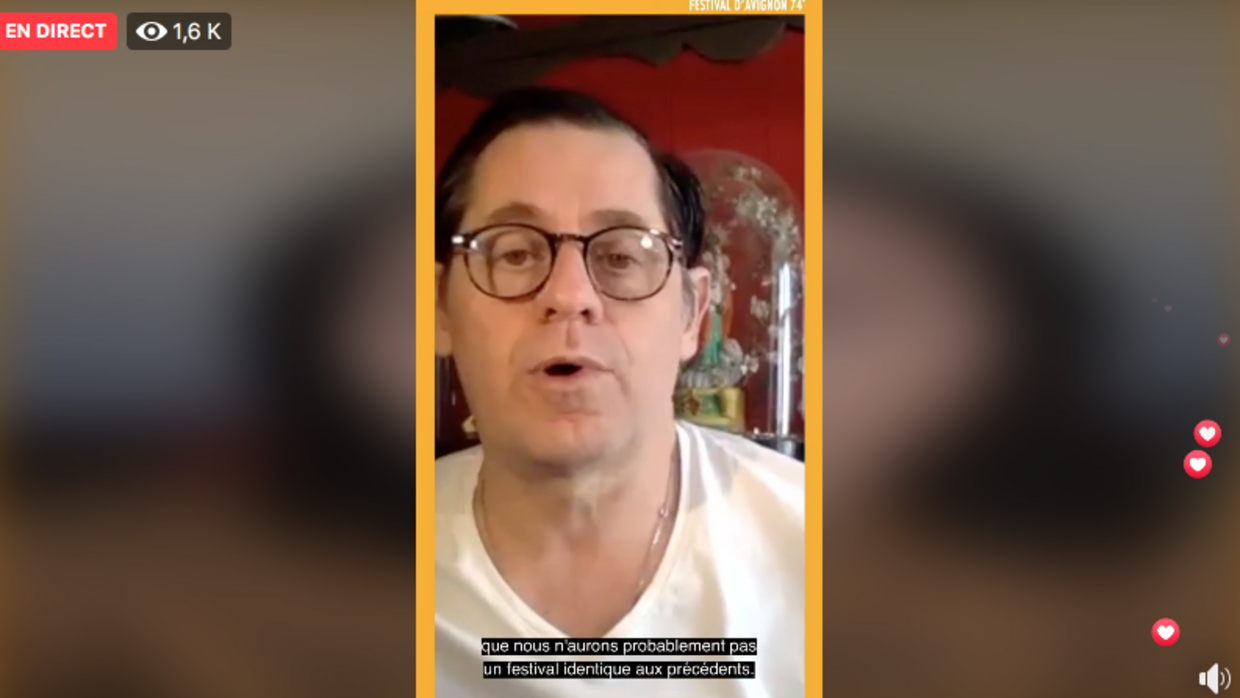 Is it time to talk about Eros and Thanatos in the theater when the number of deaths caused by the coronavirus in France has passed the 10,000 mark? On Wednesday April 8, Olivier Py presented the 45 shows from his Avignon Festival program in a video conference, without really knowing whether the flagship event of the performing arts in Europe will be able to continue between July 3 and 23.

” Welcome to this strange presentation of the 74th edition ” However, when the director of the Avignon Festival summons us to a presentation of the 2020 edition with a fake live on Facebook Live, with unfortunate editing cuts, skipping the question-and-answer part with Internet users, that reinforces the impression that times are serious. ” This confinement is tragic, but fascinating ” And Olivier Py remains convinced: ” the theater will survive “

The 2020 edition planned (or ” the one we dreamed of “, According to Olivier Py) will revolve around two gods: Eros and Thanatos, for” ask us what it means: to die, to desire, today, in the world as it is, in a globalized world. “The theme visibly provoked the ire of a part of connected people. On the live, incredulous, even hateful comments were heard: ” Eroticism in death ? I will send you Friday to Cameroon to attend the funeral in full confinement. You’ll see, it’s very sexy. “” Very nice programming. But how will all foreign artists come ? It’s science fiction. “

For the moment, Olivier Py, like Saint Geneviève imploring Parisians in the 5th century not to abandon the city in the face of the invasion of the Huns, calls, despite the pandemic, to keep the Festival in the city ​​of the popes. So, if all goes well, the curtain will rise on July 3 in the courtyard of the Palace of the Popes to open the 74th edition of the Avignon Festival with the new creation by Dimitris Papaioannou. The 55-year-old Greek choreographer staged the opening ceremony for the 2004 Athens Summer Olympics. As for the ambitions for his new play: “ Faced with the rebalancing that our society is going through, I want to look at these icons with tenderness before “killing” them …“

“The death of love”

In any case, at Angélica Liddel, the Spanish priestess of the unconventional theater, there will be no shortage of madness, given her play entitled Liebestod (The death of love) – History (s) of theater III. Long awaited too The shadow game by Valère Novarina, directed by Jean Bellorini.

And perhaps to make us dance to the melody of Eros and Thanatos, desire and death, in the forest of the collective unconscious, dance will occupy, with seven shows, a large place in the programming, including the creation from Hofesh Shechter: Double murder.

Ivo van Hove will approach the father of psychoanalysis from the angle of Sigmund Freud’s young years, without forgetting that it was the character of Hamlet who had inspired Freud to develop psychoanalysis … Van Hove explains that he wanted to show the ” discoverer who is not afraid to take the risk of failing “

The online presentation of the 2020 edition lasted 45 minutes without the words “coronavirus” or “Covid-19”. O are pronounced only once. Olivier Py seems almost obsessed to make this 74th edition exist at least in the imagination so that it will not also become a victim of the pandemic.

And where some of his colleagues are accused of wanting to fill the void caused by the closure of performance halls with initiatives in the digital world, with theater on the phone or free performance recordings made available to Internet users, Olivier Py seems decided to refuel at the theater at all costs: ” The theatrical fact is not to be behind a screen, that’s for sure. It is to come together, it is that there is a community of spirit which comes together to, together, seek what in us can be even more human. This meeting in Avignon is probably one of the most beautiful examples in the world. I hope we will raise the curtain on this wonderful edition. “

Py himself plans to create two Shakespearean shows: Othello Astrologer, with prisoners from the Avignon – Le Pontet penitentiary center, and Hamlet conjugation in imperative, the outdoor theatrical soap opera in the garden of the Ceccano library. This is his way of chasing Shakespeare: ” What is the theater for? Is it used for something? Should it be used for something? “

From Brett Bailey to Felwine Sarr

In terms of African creation, Py announced the return of Brett Bailey from Cape Town to the city of the popes with Samson, ” an apocalyptic musical play, which transposes the tragic biblical hero and his story of love, betrayal and revenge in the 21st century. An artistic response to the questions of mass immigration and extremism. In 2013, with his play Exhibit B, it had first aroused admiration in Avignon, before boundless anger during the recovery (under police protection) in 2014 in Saint-Denis, accused of cultural appropriation by anti-racist organizations.

Burkinabe Etienne Minoungou will perform Traces – Speech to African Nations from economist-philosopher-musician Felwine Sarr. The latter will gladly give a reading of René Char in echo.

Franco-Ivorian Eva Doumba, an African watch, will tell us stories about food and domination. In his room Autophagies cross ” food, theater, music and documentaries. Autophagy is the act of eating yourself. And the Guinean Hakim Bah (Prix RFI Théâtre 2016) will be present as part of Long live the subject!, the small but oh-so inspiring formats of the Avignon Festival.

“The sacred of life”

It remains to be seen how the coronavirus pandemic will evolve. When the Edinburgh Fringe Festival has just canceled its 2020 edition scheduled for August, Olivier Py seems ready to do anything to save the Festival d’Avignon: lighten the program, shorten the Festival, decrease the number of spectators, delay the dates … with only one limit: ” I played days of mourning, days of extreme fatigue, without an audience, without light, or sometimes wondering to go to the demonstrations. There is nothing more sacred than theater, but without sacrificing life. There, the sacred of life prevails “

Share
Facebook
Twitter
Pinterest
WhatsApp
Previous articleVIDEO. Italy: bridge collapsed in north of country, injured
Next articleInformation victim of the coronavirus epidemic in Serbia
Save 60.0% on select products from SAMMIX with promo code 6018YMV7, through 4/25 while supplies last.