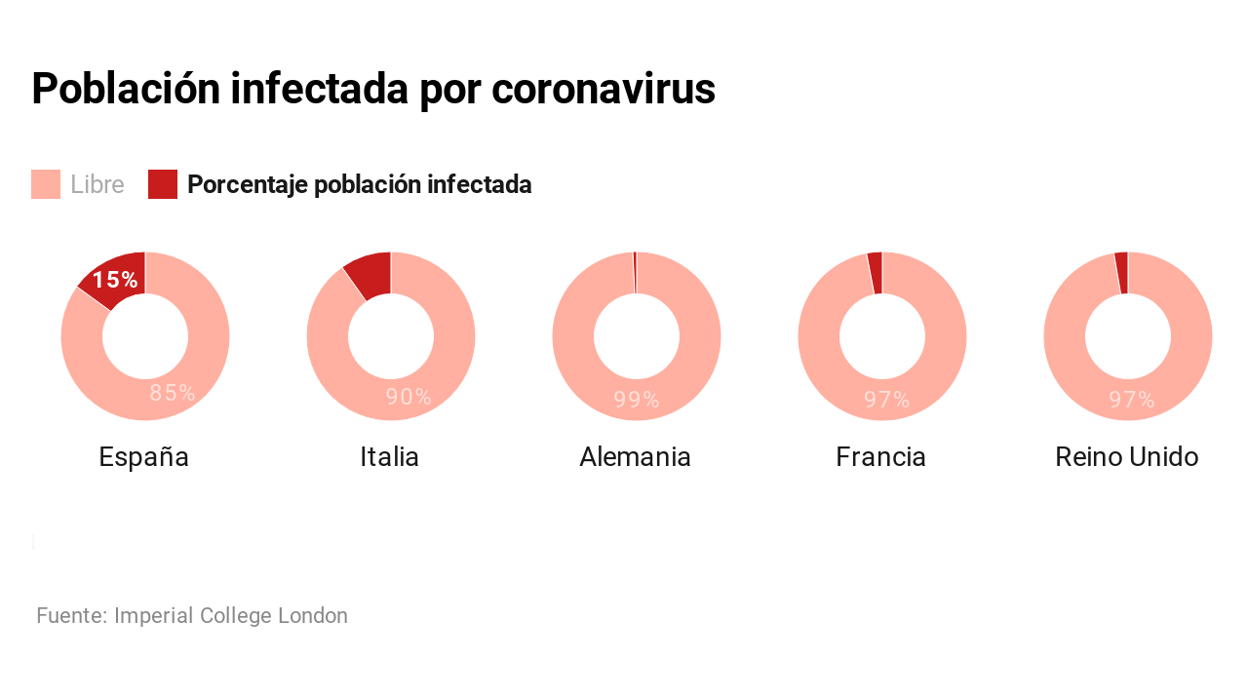 How many people have already passed the coronavirus in Spain? The answer to this question is one of the keys that will determine the time horizon for the return to “normality” in our country. Last Sunday, at a press conference, the director of the Center for Coordination of Health Alerts and Emergencies (CCAES), María José Sierra, claimed that the Ministry of Health, along with other entities, were working on a study with rapid tests to know in “a few weeks” the number of people immunized against the coronavirus in Spain.

The announcement was made after Germany reported that it was going to perform 3,000 blood tests on random citizens in the city of Munich to try to extrapolate the actual percentage of coronavirus-infected in the country.

«If the test is done as announced to a representative sample of 30,000 Spanish families We will know the percentage that the infection has passed and therefore it would have antibodies they would probably be protective against future reinfections. That it is done with such a large sample will allow to objectify a percentage with adjusted intervals. If low percentages were obtained it would mean that there is a large population that could suffer from the infection and therefore the preventive measures already known to all should continue, “he points out. Joan A. Caylà, former head of the Epidemiology service of the Barcelona Public Health agency and president of the UITB foundation.

In Spain, despite the fact that the official data this Wednesday was 146,690 infected and 48,021 recovered, The truth is that the figure may be far from reality since there are several factors to take into account, such as the limited capacity to carry out diagnostic tests, as well as the fact that they have been infected asymptomatic or mild cases that have not needed to see a doctor.

“The confirmed cases are just the tip of the icebergThey are basically cases attended in hospitals and to which the test has been carried out. Therefore, from the outset, cases attended in primary care and asymptomatic patients who have suffered the infection and can spread are escaped. Those confirmed therefore are a small percentage in relation to the total number of infected», Explains Caylà.

While waiting for the tests announced by Sierra to be carried out, several investigations have been published on the number of infected in our country, which are shifting figures ranging from three million to seven.

One of the most widespread has been the one carried out by the Imperial College London (United Kingdom) who estimated that until March 28 in Spain she was infected 15% of the population, which was equivalent to 6.99 million people.

According to these figures, Spain would be the most affected European country, followed by Italy with 5.9 million cases (9.8% of the population). For its part, just 0.72% of the German population would have the virus, some 600,000 people. In France, there would be around two million affected, 3% of the citizens; and in the United Kingdom 1.79 million people, 2.7% of the total.

Paradoxically, the fact that our country has the highest percentage would be positive since it would mean that we have more people immune to the disease.

The estimate made by Imperial College is quite close to the data that emerged from the last macro-survey carried out by a team of Spanish researchers, led by the expert in Artificial Intelligence, Nuria Oliver, of the Royal Academy of Engineering of Madrid and the European Laboratory of Learning and Intelligent Systems (ELLIS).

According to the report, up to 17% of participants claimed to have at least one of the most relevant symptoms of coronavirus disease, and 6.5% also indicated having one of the most severe symptoms (fever, cough, and shortness of breath). Also, when participants were asked if they had had the Covid-19 test, 92.4% indicated that they did not feel the need to do it, however, 6.4% said that their doctor had recommended it. , but that there was no test available.

Another study that is continuously updated is the one carried out by an international group of scientists led by the researcher Antonio Fernández Anta from the Imdea Networks Institute. His calculations on Sunday estimated that in Spain there were some three million infected with symptoms (exactly 3,093,468, with a 95% confidence interval of [2.722.916, 3.464.020]).

«One of the objectives when designing these questions was to scrupulously respect the data protection laws. For this reason, the survey is anonymous and does not collect any information that could lead to the identification of either the participants or the infected cases that are counted, “says the researcher.

Why is it important to know the data?

On the one hand, getting as close as possible to the number of people who have passed the coronavirus will allow us to foresee the resources that will be needed in the future: “You can estimate how many of them might need hospitalization, access to the ICU and ventilators in the coming days,” says Fernández Anta.

On the other, having the real number of infected it would allow to know how many have antibodies, “What would give a” biological passport “to return to normality”, explains the Professor of the University of Statistics and Operational Research at UNED, Alfonso García.

In this way, until it arrives the longed for vaccine, which seems to be still at a distance of between year and year and a half, the only option that remains is for the population to acquire immunity, but What percentage of the infected population is necessary to stop the virus?

“If we compare with measles, which is also highly transmissible, it is required that more than 95% of the population be immunized (by vaccination or by having passed the infection). Obviously we will not be in these percentages with the coronavirus, so multiple and even large epidemic outbreaks can be registered in SpainCaylà warns.

Precisely, to stop not only the current outbreak of the epidemic, but the future that may occur until the vaccine is available, experts warn that both hospitals, primary care and epidemiological surveillance services in Spain be alert to identify and control new cases and their contacts, in order to avoid new epidemic outbreaks like the current one.

“With a simile on fire, if we put out a small fire we will avoid an uncontrollable fire», Caylà points out. “Ideally, this coronavirus should be removed as SARS did. Unfortunately, today, the number of infected worldwide and that of affected countries is very high and the pandemic is progressing over time between countries. This implies that the virus will persist among us for many months at least».

Share
Facebook
Twitter
Pinterest
WhatsApp
Previous articleThis is how Quibi works, a revolutionary Netflix of short and vertical videos
Next articleGet a “close-up” of the energy jet from a black hole
Save 60.0% on select products from SAMMIX with promo code 6018YMV7, through 4/25 while supplies last.