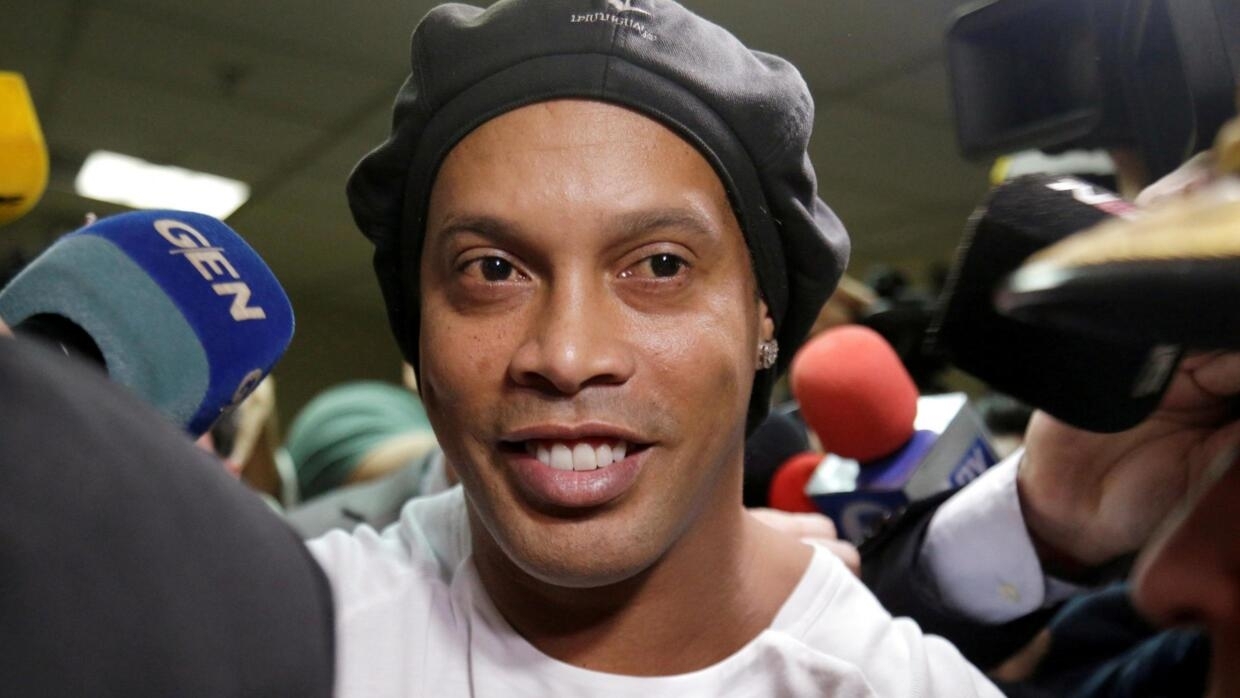 The former FC Barcelona star was released from prison after 32 days. But Ronaldinho must remain in Asunción, where he is under house arrest, at the disposal of the Paraguayan justice.

His broad smile never left him. And he can smile now Ronaldinho, since he was able to leave his prison on April 7, 2020, in the evening. In shorts and by signing, to an admirer who came to watch him, an autograph on a jersey of the Gremio de Porto Alegre, the club of his beginnings.

“Ronnie” and Assis, his brother and agent, will therefore have spent a month behind bars, released in exchange for a bond of 1.6 million US dollars. But the Assis Moreira brothers cannot leave Paraguay, because they are only on probation, locked in the luxurious Palmaroga hotel in the historic center of this small South American capital. ” At their expense “Said the judge in charge of the case.

It was also in a hotel in Asunción that the two former footballers were arrested for possession of false documents when they entered Paraguayan soil.

The forced stay in prison will have been long, but apparently not very burdensome for the former Barça and PSG star! Photos and images of his confinement showed him playing football, or soccer volleyball. His fellow comrades fought over his presence on their team. R10 even played on the team that won a futsal tournament and won the jackpot: a 16-pound pig!

Testimonies in the Paraguayan press also tell that his cell remained open to the many visitors curious to meet the one who became world champion in 2002 and Ballon d’Or in 2005. Anonymous or Paraguayan footballers, like the ex-captain of the national team Carlos Gamarra, came to take selfies, and support him morally.

So in this country with dilapidated and overcrowded prisons, he had an individual cell at the police station, where donations had improved his small space, a fridge-bar, a TV, a bed, an air conditioning unit. He had also been able to keep a phone!

Some of his 167 fellow prisoners were crying when he left last night. ” The presence of this famous footballer caused enthusiasm and joy among the prisoners “, Noted the chief commissioner of the place, Blas Vera.

On March 21, the day of his 40th birthday, Ronaldinho received a special message from his former FC Barcelona partner, the Cameroonian Samuel Eto’o, via social networks: ” I can’t tell you the feeling inside me. I can’t imagine what you’re going through. I can only send you strength and tell you that I love you very much. I hope everything will be settled quickly because you are a good person (…) You can count on me to do whatever is necessary. I would do what is in my power (…). “

A procedure slowed down by the coronavirus

The Brazilians, their real names Ronaldo and Roberto de Assis Moreira, will now have to be patient, because the investigation of their case is as frozen as the Paraguayan justice, because of the coronavirus. Fourteen other people are charged in this case of false documents.

In Brazil, admirers and supporters of Ronaldinho, whom they call “o Bruxo”, the balloon wizard, are still wondering what was going on behind this strange journey. The charity project, mentioned as an excuse, was very vague, it is believed, to deceive the two travelers.

Ronaldinho has always deserved, thanks to his spectacular talent, the benevolence of Brazilians for his personal life made up of parties, music and romantic adventures. Since the end of his career in 2016, he has continued to delight, at the whim of requests for exhibition matches around the world.

In his country, R10 also created an annual charity game for Christmas; a “Natal Show of Bola” intended to collect food for poor children. When he leaves, Ronaldinho will undoubtedly have to work a lot to regain his lost honor.

Share
Facebook
Twitter
Pinterest
WhatsApp
Previous articleBartomeu’s witch hunt in Barcelona: “There is fear in the Board of Directors”
Next articleCoronavirus: Left calls for climate offenders to be excluded from economic aid
Save 60.0% on select products from SAMMIX with promo code 6018YMV7, through 4/25 while supplies last.