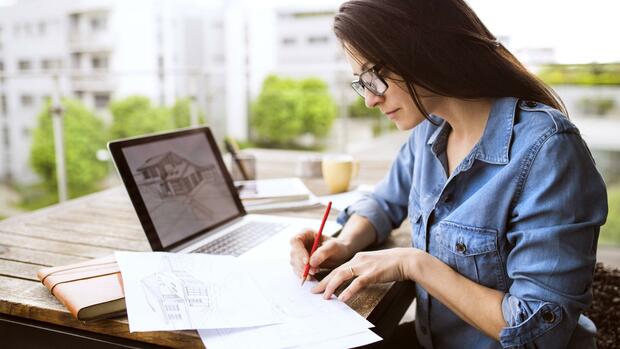 There is one sentence that politicians, managers and consultants are keen to try these days, namely that Germany is experiencing a digitization boost from the crisis. A forced digitization, so to speak, because a lot of everyday things can only be done digitally in times of shutdown.

Thousands and thousands of people spend countless hours of their everyday home office in video conferences, work virtually together on documents and now even pay contactlessly with credit cards at the bakery – or with their smartphones, as more and more retailers expressly demand. This is remarkable in a country where such digital technologies have a harder time than elsewhere.

But it is naive to believe that this alone will make Germany more digital because millions of people learn how the camera on their computer works. What we are experiencing is not a digitization surge, it is a pseudo-digitization of everyday life, in which some tools come into focus due to the lack of alternatives.

The video service Zoom is such an example or the communication program Teams from Microsoft. There is nothing wrong with that. For many, services are the only connection to the outside world.

Digitization, however, means more than just using a few instruments from US providers: there is usually a profound change in processes, procedures – and ultimately also business models. And on this issue, the corona crisis primarily exposed our country’s digital deficits.

Example administration. The federal government actually wanted to digitize all government services by 2022. But the goal, as many now realize, is a long way off. Renew your ID card? Because of Corona, many offices are tight, digital options are usually not available. In many cities, it is also difficult to register cars, which should give another blow to the already slumped vehicle sales.

The situation in the judicial authorities is hardly any better. There are also many employees in the home office there. But because the authorities in Hamburg, for example, have insufficiently secure data lines and files between police and courts can often only be exchanged on paper, drivers have to transport the folders through the city.

Example health. Especially in the emergency rooms of the clinics, many decisions are about seconds, especially when communicating with emergency services. But many of these processes only start when a fax has been received. Electronic health records and prescriptions have been talked about for years – “in fact, the fax machine is still extremely important there,” said Essen University Hospital chief Jochen Werner in the podcast Handelsblatt Disrupt. “If we had digitized healthcare more consistently, it would be easier for us to fight Corona.”

Education example. When the schools were closed, there was a lot of confusion: for the first time, many teachers had to deal with how they can convey their material digitally. Many people make do with the dropbox, YouTube and video conferencing.

However, some had to have the students first explain how to get their webcam up and running. The educational cloud, a digital teaching and learning environment that the Hasso Plattner Institute has been working on for years, would have made all this easier.

And companies that have announced all sorts of digital projects in recent years are now reacting with old reflexes of the crisis: concentrating on their core business. The first companies are already reducing the funds for their future laboratories, which, for example, maintain relationships with start-ups. Understandable from a return perspective, but also a risky course at a time when the core business in many companies is being turned upside down by the digital transformation.

A more consistent digitization would be the better way out of the crisis – in companies, government and administration. A real digital agenda. To this end, the federal government should not focus potential stimulus packages for the period after the crisis primarily on promoting consumption, as it has done too often, but instead use them for investments in digital change – through tax breaks for companies such as those in future technologies such as Invest artificial intelligence, blockchain or quantum computers.

In addition, the interface between research and companies could be strengthened through funding programs so that research results become business models more quickly. Another element of a digital agenda must be a billion dollar program to digitize public life. Authorities and hospitals can use digital processes to work more efficiently and digitally empowered schools can better prepare young people for a digital future.

All of this would have a long-term effect. The corona crisis creates a painful break. But it also offers the chance to change course towards a more digital country.

Share
Facebook
Twitter
Pinterest
WhatsApp
Previous articlePharmaceutical industry is looking massively for Covid-19 therapy
Next articleSpahn sees starting points for a gradual return to normalcy
Save 60.0% on select products from SAMMIX with promo code 6018YMV7, through 4/25 while supplies last.