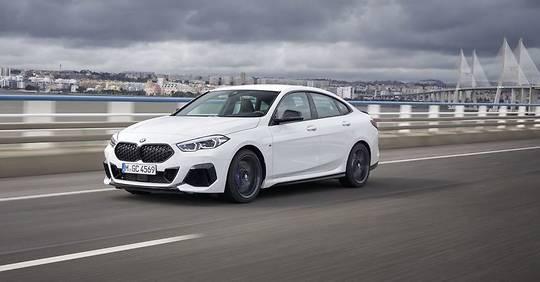 The BMW 2 Series Gran Coupé is to the 1 Series what the Mercedes CLA is to the A Class: a lowered and lengthened version by the addition of a rear trunk. We gain in boot volume what we lose in rear habitability, which becomes a bit tight on the roof. Dynamically, the qualities and faults of the Series 1 remain. The Series 2 is efficient and fun to drive, provided you avoid the very excessive Sport mode of damping. Likewise, the M235i’s Torsen front differential causes unpleasant steering lifts.

Read also BMW 1 Series: the end of an era

The multiplication of silhouettes continues for BMW, which applies a proven recipe with the 1 Series to derive this 2 Series Gran Coupé: on the same platform with unchanged wheelbase of 2.67 m, the bodywork is redesigned to lower the roof 1.5 cm thanks in particular to frameless windows, while the overhangs are lengthened by 2 cm at the front and 18 cm at the rear. At 4.53 m the Series 2 Gran Coupé therefore fits perfectly between the Series 1 (4.32 m) and the Series 3 (4.70 m).

The interior design evolves much less than that of the bodywork: the 2 Series Gran Coupé takes up almost without modification the dashboard of the 1 Series. The manufacturing quality is excellent, as is the driving position. On the other hand, the habitability suffers from a roof clearance limited to the rear, prohibiting the use of the large bench seat (more than 1.75 m). The trunk is shown to be deep and roomy with a loading volume of 430 liters, adjustable by folding the backrests of the rear seat.

The BMW group put the small dishes in the big ones during the design of the UKL platform used by Mini and the BMW with transverse mechanics. Rigid, with a multi-link rear axle in standard configuration and, for this Series 2, a variable-pitch rack-and-pinion steering, it offers precise and efficient handling. The damping piloted in two positions is less convincing, because of a caricatural calibration in sport mode because very fixed.

Vigorous and rather discreet, the 4-cylinder turbo diesel 190 hp of the 220d takes advantage of the Aisin 8-speed gearbox. Even more efficient, the M235i’s 4-cylinder turbo petrol reveals the limits of the UKL platform. The Torsen-type limited-slip differential that equips the front axle this version certainly limits the slip of the inner wheel during a vigorous acceleration out of corners, but it also generates torque increases in the direction detrimental to the precision trajectory and course keeping. No doubt it would have been necessary to avoid this phenomenon a front axle with decoupled pivots, like the one used by Renault on the Mégane RS or Honda on the Civic Type R.

It is all the more unfortunate that this M235i does not take advantage of this Torsen differential either to generate a yaw torque delaying the appearance of understeer like the Toyota Yaris GRMN. Thus, during strong acceleration out of corners, the M235i xDrive widens the trajectory when approaching the grip limits like a conventional traction. To find this oversteer of power typical of traditional BMWs – those with rear-wheel drive -, we will have to wait for the next 2 Series coupe (two doors therefore), which will be developed on a KLAR propulsion platform like the 3 Series, and can therefore also be driven by a 6-cylinder in-line.

Stray lifts in the direction (M235i)

Share
Facebook
Twitter
Pinterest
WhatsApp
Previous articleBarça confirms that it will include the players in its ERTE
Next articleThe US is already the country in the world with the most confirmed cases of COVID-19
Save 60.0% on select products from SAMMIX with promo code 6018YMV7, through 4/25 while supplies last.